Ghost Map is a collaborative collection of books and memories. Books were made and left in the many cities throughout Italy that were visited by students of University of Georgia's Cortona Study Abroad Program, Fall semester 2015.

This project is an extension of my Find and Bind project started in 2005. For Find and Bind I would choose a location in public, collect materials from the location, bind a book from the found items and leave the book behind.

Books were made either from materials found on site and assembled on the spot or were premeditated and crafted in the studio and all were left behind / contributed to the cities in which we traveled. Each book was documented with a photo and the location where it was dropped was pinned as a point on the map. As a group we accepted the notion that books are, at their most elemental, a series of spaces with a corresponding series of signs experienced at different moments in time.

Our hope with this project was to perform a physical and experiential exchange. We wanted to highlight the fact that as we move, albeit quickly, through these place we gain experiences and leave a traceable impact in our wake.

Conceived as a project that encourages collaboration, improvisation, and exploration of place, it evolved into something more. The project prompted questions of content, scale (what makes a "book that isn't mistaken for garbage") and it prompted a lot of fun and inside jokes. The pictures and descriptions convey an experience of Italy that is more intimate than the usual grand photos in commonly acknowledged grand monuments. There are images of quiet, of pause, of hanging out with friends, and waiting for the next thing to happen.

And so, in the end the project has also become a journal of our travels and personalities, a lasting collection of a series of spaces with a corresponding series of signs (or signposts) experienced at different moments in time....with a fabulous group of people. 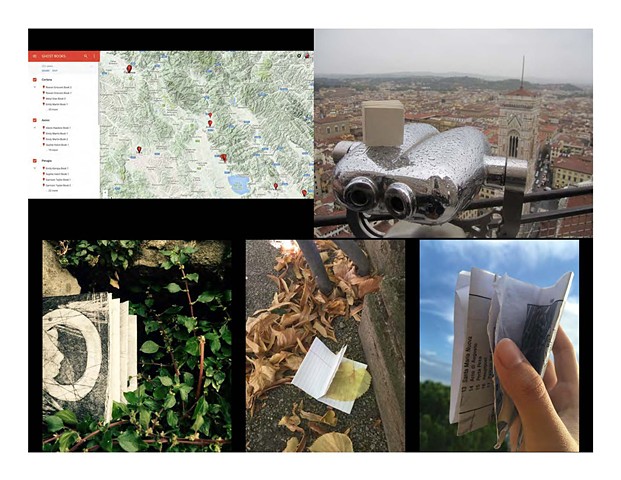